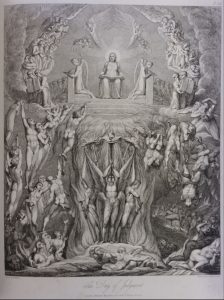 With the publication of Judgment in the Victorian Age, an edited collection published by Routledge recently, bringing together essays from the conference which was organised by the research cluster, PUNCS (Plymouth University Nineteenth-century Studies), on the very day of the Brexit vote (23 June 2016), one of the editors ponders the vexed question of judgement or judgment.

How were various specialist forms of judging conceived and operated, and how was the propensity to be ‘judgmental’ (itself not a word used at the time) viewed in the nineteenth century? Judgment in the Victorian Age looks at the acts of judging in nineteenth-century Britain and the British world, beginning with the major figure of the judge and their judicial acts in courts of law. Importantly, the contributors also explore non-legal judging and judgmentalism, viewing the Victorians as censors and critics in the aesthetic spheres, and within literature – whether these be the reviewers judging the poetry of the radical Percy Shelley, or the verdicts on criminality in communities offered by popular but ‘non-canonical’ novelists. How people were judged according to such indices of character as handwriting, is also studied.

But is this judgment or judgement? You’ll have noticed the previous paragraph avoided making that choice. Our diligent proof reader for Routledge was obviously concerned to standardise the spelling: would we go with the British or the American spelling? From previous experience as a book author, I’d been led to believe the distinction between ‘judgement’ and ‘judgment’ according to whether this was American English or British English, and depending on whether it was the sentence passed by the judicial figure or not, was clear cut. But immersion in nineteenth-century texts soon robbed me of that certainty.

Don’t believe what the online lexicographic advisers tell you when they claim a correct usage in this instance. Oxford University Press assures us British English users that the ‘normal spelling in general contexts is judgement. However, the spelling judgment is conventional in legal contexts,’ (https://en.oxforddictionaries.com ). ‘Judgment’ seems to be the favoured general usage for the Guardian today, and was the usage for The Times from the 1960s, although the digital archive shows it being applied inconsistently in earlier decades of the century: in the nineteenth-century British newspapers frequently spell it without the ‘e’ regardless of whether it is being applied in a legal setting, and many other texts make it clear that the Victorians were perfectly happy to spell the word as modern Americans do.

From the titles given to artistic depictions of the final judgment of mankind according to the Christian religion, such as William Blake’s engraving of ‘The Day of Judgment’ in Blair’s The Grave  (1813), the many printed sermons, tracts on controversies such as the Judicial Committee of the Privy Council’s verdicts on doctrinal disputes and ritual in the Established church, and manuals on conduct: the spelling of the word as ‘judgment’ seems to have been widespread during the nineteenth century.

My trusted Chambers’s Etymological Dictionary of the English Language (a revised edition of 1882) is quite clear on the spelling, if setting up the usual bewildering arrays of meaning:

Judgment, jujment, n. act of judging: the comparing of ideas, to elicit truth: faculty by which this is done, the reason: opinion formed: taste: sentence: condemnation: doom.

Not every American commentator, after all, had been happy with Webster’s innovations in orthography. One American review of Noah Webster’s quarto Dictionary noticed the inconsistency with which the American lexicographer spelled the word, compared with his Spelling Book (first published in 1783), alongside similar word formations such as acknowledgement, lodgement and abridgement. (John Pickering, A Vocabulary: Or Collection of Words and Phrases which Have Been Supposed to be Peculiar to the United States of America. To which is Prefixed an Essay on the Present State of the English Language in the United States, 1816).

The Cambridge-educated Head Master of the Lower School Collegiate Institution in Liverpool, John Michôd, in his London-published work of 1855 claimed:

If an affix you add, with a consonant starting,

To a silent e word, with that e don’t be parting,

EXCEPT in such words as acknowledgment, judgment,

Duly and truly, abridgment and lodgment.

Orthographic aids; or, Mnemonics for spelling and exercises in derivation

And take this, emanating from Melbourne in 1869, from Benjamin Suggit Nayler, ‘accredited elocutionist to the most celebrated literary societies in London’:

I wish to grind into dust (under the heel of stubborn facts) the pretensions of Printers to authority in Spelling,

and to persuade my readers, if I can, to have recourse to their own judgements!

To this analogical Rule, Lindley Murray most injudiciously made the 5 words abridgment, acknowledgment, argument, judgment, lodgment,

Exceptions; nor did Murray ever deviate from Walker’s superior mode of Spelling, without committing a blunder—rely upon this.

The reasons assigned by different writers for the unnecessary Exceptions they make to general Rules, are groundless. Murray says of his 5 Exceptions,

These deviations have the merit of omitting an unnecessary letter, without altering the pronunciation of the original words;” while “Examiner ” Angus, with as little penetration as Murray, tells us, on p. 114,

After dg, the e is generally omitted, as the g is made soft by d; as judgment, abridgment:”

both of which excuses for countenancing erroneous Spellings, are as false as they are silly; neither of them for one instant defensible.

B.S. Nayler, Commonsense Observations on the Existence of Rules … Regarding the English Language (1869)

Of course, as online discussions of English spelling inform us, the early twentieth-century expert Henry Watson Fowler chose ‘judgment’ as ‘older and more reasonable’ and offered plausible grammatical ruling for this.

In the end we plumped for the spelling that was so apparent in the texts of the nineteenth century, and that looked right to an American eye; and though the tendency seems to be go with the spelling without ‘e’ in British English now, if our usage looks odd to British readers at least it makes the word stand out. This blog pre-empts one reviewerly comment at least!

Judgment in the Victorian Age, edited by James Gregory, Daniel J.R. Grey, and Annika Bautz, from the University of Plymouth, was published in October 2018 by Routledge.