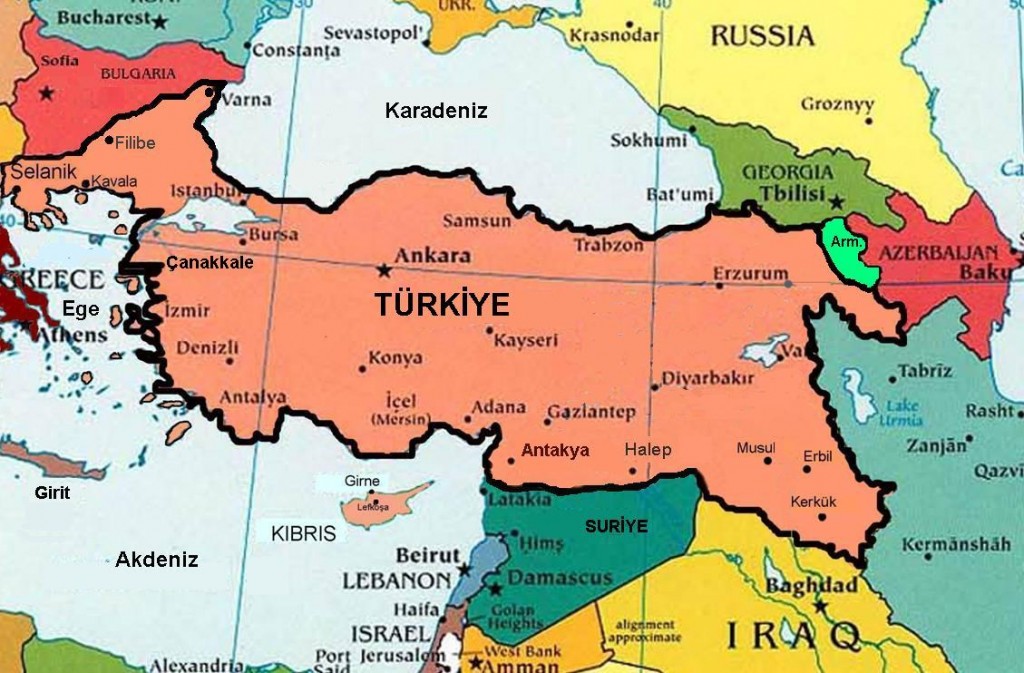 In the past few weeks, a conflict between Ankara and Baghdad over Turkey’s role in the liberation of Mosul has precipitated an alarming burst of Turkish irredentism. On two separate occasions, President Recep Tayyip Erdogan criticized the Treaty of Lausanne, which created the borders of modern Turkey, for leaving the country too small.

He spoke of the country’s interest in the fate of Turkish minorities living beyond these borders, as well as its historic claims to the Iraqi city of Mosul, near which Turkey has a small military base. And, alongside news of Turkish jets bombing Kurdish forces in Syria and engaging in mock dogfights with Greek planes over the Aegean Sea, Turkey’s pro-government media have shown a newfound interest in a series of imprecise, even crudely drawn, maps of Turkey with new and improved borders.

Turkey won’t be annexing part of Iraq anytime soon, but this combination of irredentist cartography and rhetoric nonetheless offers some insight into Turkey’s current foreign and domestic policies and Ankara’s self-image.

The maps, in particular, reveal the continued relevance of Turkish nationalism, a long-standing element of the country’s statecraft, now reinvigorated with some revised history and an added dose of religion. But if the past is any indication, the military interventions and confrontational rhetoric this nationalism inspires may worsen Turkey’s security and regional standing.

At first glance, the maps of Turkey appearing on Turkish TV recently resemble similar irredentist maps put out by proponents of greater Greece, greater Macedonia, greater Bulgaria, greater Armenia, greater Azerbaijan, and greater Syria. That is to say, they aren’t maps of the Ottoman Empire, which was substantially larger, or the entire Muslim world or the Turkic world. They are maps of Turkey, just a little bigger.

But the specific history behind the borders they envision provides the first indication of what’s new and what isn’t about Erdogan’s brand of nationalism.

These maps purport to show the borders laid out in Turkey’s National Pact, a document Erdogan recently suggested the prime minister of Iraq should read to understand his country’s interest in Mosul. Signed in 1920, after the Ottoman Empire’s defeat in World War I, the National Pact identified those parts of the empire that the government was prepared to fight for (*).

Specifically, it claimed those territories that were still held by the Ottoman army in October 1918 when Constantinople signed an armistice with the allied powers. On Turkey’s southern border, this line ran from north of Aleppo in what is now Syria to Kirkuk in what is now Iraq.

When the allies made it clear they planned to leave the empire with a lot less than it held in 1918, it led to renewed fighting in which troops under Mustafa Kemal Ataturk defeated European forces to establish Turkey as it exists today. For the better part of the past century, Turkey’s official history lauded Ataturk for essentially realizing the borders envisioned by the National Pact (minus Mosul, of course), as recognized with the Treaty of Lausanne.

It was an exaggerated claim, given the parts of the pact that were left out, but also an eminently practical one, intended to prevent a new and precarious Turkish republic from losing what it had achieved in pursuit of unrealistic territorial ambitions.

Indeed, while countries like Germany, Italy, Bulgaria, and Hungary brought disaster on themselves by trying to forcibly rewrite their postwar borders, Turkey — under Ataturk and his successor — wisely resisted this urge.

Erdogan, by contrast, has given voice to an alternative narrative in which Ataturk’s willingness in the Treaty of Lausanne to abandon territories such as Mosul and the now-Greek islands in the Aegean was not an act of eminent pragmatism but rather a betrayal. The suggestion, against all evidence, is that better statesmen, or perhaps a more patriotic one, could have gotten more.

Among other things, Erdogan’s reinterpretation of history shows the ironies behind the widespread talk in the United States of his supposed “neo-Ottomanism.” A decade ago, Erdogan’s enthusiasm for all things Ottoman appeared to be part of an effective strategy for improving relations with the Muslim Middle East, a policy that some U.S. critics saw as a challenge to their country’s role in the region. But refashioning the National Pact as a justification for irredentism rather than a rebuke of it has not been popular among Turkey’s neighbors.

Erdogan’s use of the National Pact also demonstrates how successfully Turkey’s Islamists have reappropriated, rather than rejected, elements of the country’s secular nationalist historical narrative. Government rhetoric has been quick to invoke the heroism of Turkey’s war of independence in describing the popular resistance to the country’s July 15 coup attempt.

And alongside the Ottomans, Erdogan routinely references the Seljuks, a Turkic group that preceded the Ottomans in the Middle East by several centuries, and even found a place for more obscure pre-Islamic Turkic peoples like the Gokturks, Avars, and Karakhanids that first gained fame in Ataturk’s 1930s propaganda.

Similarly, in Syria and Iraq, Erdogan is aiming to achieve a long-standing national goal, the defeat of the Kurdistan Workers’ Party (PKK), by building on the traditional nationalist tools of Turkish foreign policy — namely, the leveraging of Turkish minorities in neighboring countries. The Sultan Murad Brigade, comprising predominantly ethnic Turkmens, has been one of Ankara’s military assets inside Syria against both Bashar al-Assad’s regime and the PKK. 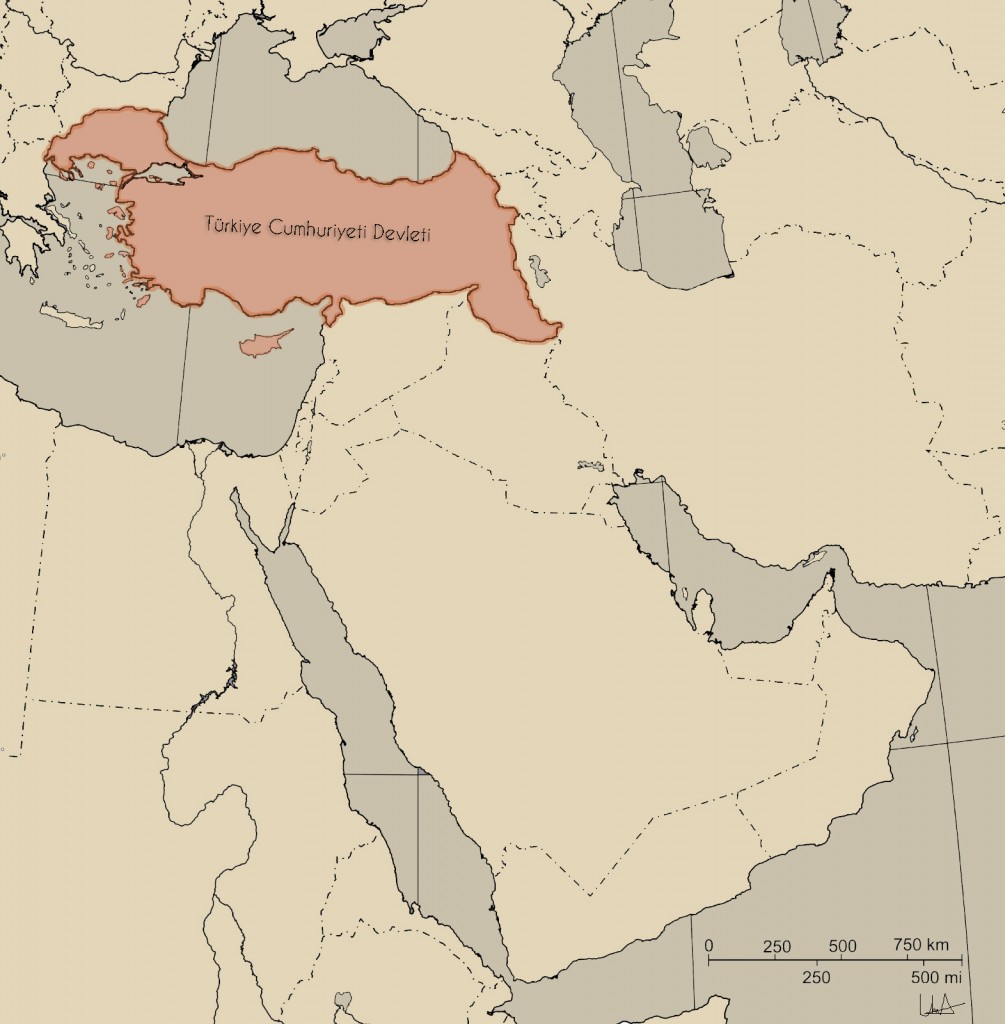 Meanwhile, the Turkmen population living around Mosul and its surrounding area has been a concern and an asset for Ankara in Iraq. Turkish special forces have worked with the Iraqi Turkmen Front since at least 2003 in order to expand Turkish influence and counter the PKK in northern Iraq.

Over the past century, the Turkish minorities in northern Greece and Cyprus have played a similar role. That is, their well-being has been a subject of genuine concern for Turkish nationalists but also a potential point of leverage with Athens to be used as needed. (Greece, of course, has behaved similarly with regard to the Greek minority in Turkey. Not surprisingly, both populations have often suffered reciprocally as a result.)

In the case of Cyprus, for example, Turkey’s 1974 invasion was as much about defending its strategic position as it was about protecting the island’s Turkish community. Following his statements about Lausanne, Erdogan further upset Greece by stating, “Turkey cannot disregard its kinsmen in Western Thrace, Cyprus, Crimea, and anywhere else.”

Yet Athens might take comfort from the case of the Crimean Tatars, which reveals the extent to which geopolitics can lead Turkey to do just this: Although Ankara raised concerns over the status of the Crimean Tatars after Russia seized the peninsula, it seems to have subsequently concluded that improved relations with Moscow take precedence over ethnic affinities.

But Erdogan has also emphasized a new element to Turkey’s communitarian foreign-policy agenda: Sunni sectarianism. In speaking about Mosul, he recently declared that Turkey would not betray its “Turkmen brothers” or its “Sunni Arab brothers.”

Like secular Turkish nationalism, this strain of Sunni sectarianism has an undeniable domestic appeal, and Erdogan has shown it can also be invoked selectively in keeping with Turkey’s foreign-policy needs. Erdogan’s new sectarianism is evident in Mosul, where Turkey has warned of the risks to Sunnis should Shiite militias take control of the city.

But the policy’s influence is clearest in Syria, where Turkey has been supporting Sunni rebels aiming to topple the Assad regime (including those now struggling to hold the city of Aleppo). In both Iraq and Syria, however, Turkey’s sectarianism has not been allowed to trump pragmatism.

Ankara has been keen to maintain a mutually beneficial economic relationship with Iran despite backing opposite sides in Syria and in the past year has also expressed its willingness to make peace with Assad if circumstances require it.

Turkey’s current interventionism in Syria and Iraq fits within an established pattern. Not only do countries regularly find themselves sucked into civil wars on their doorstep, but the points at which Turkey has proved susceptible to irredentism in the past have all come at moments of change and uncertainty similar to what the Middle East is experiencing today. In 1939, Ankara annexed the province of Hatay, then under French control, by taking advantage of the crisis in Europe on the eve of World War II.

Then, after that war, Syria’s newfound independence prompted some in the Turkish media to cast a glance at Aleppo, and the transfer of the Dodecanese Islands from Italy to Greece also piqued some interest in acquiring them for Turkey.

Similarly, Ankara paid little attention to Cyprus when it was firmly under British control, but when talk of the island’s independence began, Turkey started to show its concern. Subsequently, it was only when it appeared Greece might annex the island that Turkey invaded to prevent this change in the status quo.

In this light, Turkey’s recent rhetoric is perhaps less surprising following several years in which events and commentators have repeatedly suggested that the entire political order of the modern Middle East is crumbling.

More specifically, though, Turkish policy in the Middle East is driven by an urgent concern stemming from its conflict with the PKK, which has been exacerbated by the group’s gains in northern Syria. The PKK has long shaped Turkey’s relations with its southeastern neighbors. Most notably, Turkey nearly invaded Syria in 1998 in an ultimately successful effort to force Damascus to stop sheltering the group’s leader.

Similarly, Turkey has kept military forces in the area of Mosul for the better part of two decades, in order to conduct operations against the PKK. Ankara has always portrayed this intervention, with little controversy in Turkey, as a matter of national security and self-defense.

Today, self-defense remains Turkey’s main justification for its activities in Iraq, with Erdogan repeatedly emphasizing that the presence of Turkish forces there “acts as insurance against terrorist attacks targeting Turkey.” As long as the PKK maintains an open presence in Iraq, this is also the most compelling justification, domestically and internationally, for military involvement beyond its borders.

Indeed, to all the specific ethnic, sectarian, and historical rationales he has offered for Turkey’s interest in Mosul, Erdogan has been quick to attach one additional argument: The United States and Russia continue to play an outsized role in the region despite lacking any of these connections to it.

Erdogan noted that some countries were telling Turkey, which shares a 220-mile border with Iraq, to stay out. Yet, despite not having history in the region or connection to it, these same countries were “coming and going.” “Did Saddam [Hussein] tell the United States to come to Iraq 14 years ago?” he added.

Behind the history, in other words, Ankara is all too aware of the fact that the power to do so remains the only rationale for foreign intervention that matters. In this regard, the legitimacy of Turkey’s plans for Mosul remains to be seen.

(*) Misak-ı Millî (English: National Pact, or National Oath) is the set of six important decisions made by the last term of the Ottoman Parliament. Parliament met on 28 January 1920 and published their decisions on 12 February 1920. These decisions worried the occupying Allies, resulting in the Occupation of Constantinople by the British, French and Italian troops on 16 March 1920 and the establishment of a new Turkish nationalist parliament, the Grand National Assembly, in Ankara.