The event is a festival of artists’ moving image, presented as part of the Independent Cinema Office’s Artists’ Moving Image Network project, in partnership with artists’ film distributor LUX.

Kayla’s paper, ‘First Person Film: Performing the Self’, exploring improvised performance and the body as the site of memory, and Stuart’s presentation, ‘Archival Revival and First Person Film-making’, which concerned offscreen authorship from behind the camera, were part of the ‘Bristol LUX Open Forum: First Person Plural’ session that considered responses to the questions ‘What is it about artists’ moving image which makes it particularly suited to first-person film-making?’ and ‘How can it articulate and help to influence a position beyond the self?’. 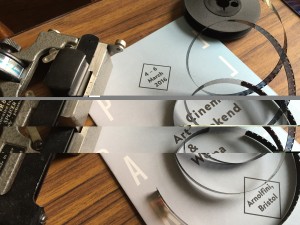