Technological advances, and more specifically computers, have been leading the evolution of music for the last 60 years, impacting on the ways we compose, perform and listen to music. For example, composers use notation software or Digital Audio Workstations (DAW). They also employ computers as sources of musical inspiration.

During my Masters in Computer Music, I explored the world of Computer-Aided Algorithmic Composition (CAAC), a field in which composers use algorithms and computing systems to aid their musical creativity and composition practice.

Building on this, my PhD explores the interactive relationship between composer and computer to help expand musical creativity. I am particularly interested in taking a different approach to composing music, one that doesn’t revolve around traditional music theory – that is, working with notes, rhythms and harmony. I am also trying to move away from the pitch-centricity of Western traditional musical writing.

I focus more on how a composition can sound rather than how I can musically write it. Thus, a feature of sound called timbre has become an important characteristic.

Timbre is a complex musical property that has been discussed a great deal by the musical community. It is often defined as all the sound properties (except pitch, loudness and duration), which allow us to distinguish and recognise the sound of two different instruments.Timbre is a powerfully immersive property of sound but it is not easily defined acoustically.

Composing with timbre, or at least being aware of this musical aspect, is not a new practice. For example, Claude Debussy paid particular attention to timbre in his compositions. Jim Samson indicates that “the music of Debussy elevates timbre to an unprecedented structural status; already in Prélude à l’après-midi d’un faune the color of flute and harp functions referentially”.

To go further than composing music for a solo instrument, I started to investigate the compositional art known as orchestration: that is, the art of composing music for an orchestra or more generally a musical ensemble. Composing for a group of instruments involves the creation of new sounds emerging from the combination of the instruments playing simultaneously. Hence, when composing for an orchestra, the musical timbre properties are an important part of the creative process.

The first project of my PhD was the development of a system able to classify short orchestral sounds generated by computer-aided orchestration systems. Such systems often propose several solutions, although listening to them to find the perfect one can be a tedious process.

My aim is to create a useful method using timbre characteristics to classify and order short audio samples in order to assist composers. In the long term this can help to overcome the process of manual listening, by analysing and indexing the timbral characteristics automatically.

In order to make the system user-friendly, I have used verbal descriptors instead of complex acoustic properties. Terms like ‘brightness’ or ‘roughness’ use everyday language to describe perceived musical timbres in ways that are more intuitive than their acoustic correlates (e.g. spectral centroid, critical bands, etc).

This prototype system includes five timbral attributes (breathiness, brightness, dullness, roughness and warmth) and is able to classify short orchestral sounds according to their timbral properties.

Following on from this, I am currently developing a generative system that uses timbre perception as the main approach for the generation of orchestral compositions.This will enable users to select the different instruments they want to incorporate in their composition.

They will also be able to define what “type” of sound they want, based on verbal descriptors, as used in the timbral classification system. For example, if they want something “bright”, the system will automatically generate a response with the instruments specified and produce bright orchestral sounds.

Although I still have a lot of programming to do, I am hoping this new interactive and generative system will encourage composers to use computing systems to help them to achieve their orchestral ideas. 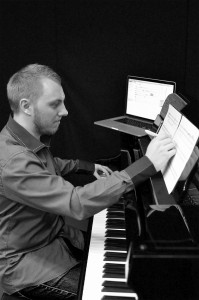 Aurélien Antoine is a PhD candidate in the AHRC-funded 3D3 Centre for Doctoral Training. He is conducting his research under the supervision of Professor Eduardo R. Miranda in the Interdisciplinary Centre for Computer Music (ICCMR) at Plymouth University. He is interested in computer-aided composition systems, artificial intelligence and computer-aided orchestration.