In him all union and disunion shine

Among the rare phenomena of the day in which we live, are the strange unions that are formed in our country. We have political unions, trades’ unions, Protestant unions, and, last and not least, the voluntary unions.

‘Union of Papists and Dissenters to Achieve the Disunion of Church and State’, Fraser’s Magazine, May 1836 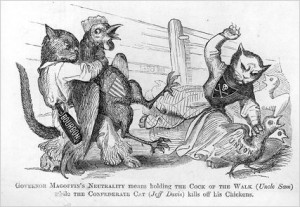 The first international conference hosted by PUNCS began on the day of the BREXIT vote, and commentators have seen this event in the context of other signs of anti-globalisation, and in a landscape of violent disintegrations or forcible integrations in the 21st century.

We are interested in papers by scholars working in British, continental European, American and world history in the Nineteenth century, in literary studies, history, legal history, art history, economic history, geography and other disciplines.

Possible themes for exploring union in individual papers or panels include:

Please send your 300 word abstract and a brief c.v. to one of the organisers listed below. The deadline is 28 November 2016. We hope to edit a selection of papers for publication after the conference.