A new book by Dr G.H. Bennett, which reassesses naval policy of the 1920s and considers the lessons for today, has just been published by Bloomsbury, a few months ahead of schedule. Bennett is Associate Professor (Reader) in History at Plymouth University. 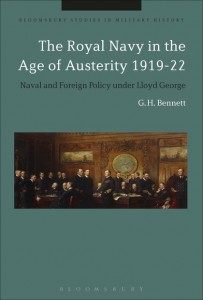 The Royal Navy in the Age of Austerity 1919-22: Naval and Foreign Policy under Lloyd George thoroughly explores and analyses naval policy during the period of austerity that followed the First World War. During this post-war period, as the Royal Navy identified Japan its likely opponent in a future naval war, the British Government was forced to “tighten its belt” and cut back on naval expenditure in the interests of “National Economy”.

Bennett draws connections between the early 20th century and the present day, showing how the same kind of connections exist between naval and foreign policy, the provision of ships for the Royal Navy, business and regional prosperity and employment.

The book engages with a series of important historiographical debates relating to the history of the Royal Navy, the failures of British Defence policy in the inter-war period and the evolution of British foreign policy after 1919, together with more mundane debates about British economic, industrial, social and political history in the aftermath of the First World War.