You are welcome to join the following research seminar, co-hosted by ARC (Artistic Research Cluster) and PEP (Performance.Experience.Presence research group) at Plymouth University:

Photo from the personal archive of Anya Lewin

Fez: The Royal Scent will complete my trilogy of moving image installations inspired by family photographs and public archives, which are used to open up questions about historical context, narrative and place and will continue my methodology of combining archival research with fictional re-creations. The trilogy will be exhibited in August 2017 and I am currently developing the final work which is Fez: The Royal Scent. I have never enjoyed speaking about work in progress as it feels like the exposure of an intimate and internal process. Through sharing a work which has not been finished or packaged I hope to open up some of the hidden elements of research. I will wear my underpants on the outside. 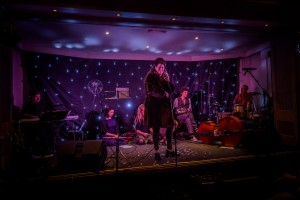 Roberta Mock, A Trip Around the World is Not a Cruise (2016). Photo: Benjamin Graham

A Trip Around the World is Not a Cruise

Performance Analysis from the Inside Out

In 1961, Pearl Williams (1914-1991) recorded her first “adult only” comedy album, A Trip Around the World Is Not a Cruise. Accompanying herself on the piano, she jokes about oral sex, vibrators, adultery, promiscuity, prostitution, ethnicity and class to late night club audiences. Williams works deep “blue,” punctuated by a liberal sprinkling of Yiddish and a few belted song parodies. Over the course of her career, she sold over a million records and yet she is barely remembered today. A Trip Around the World was regularly played at my parents’ house parties in the 1960s and 70s; in certain company, my mother used to perform some of Williams’ jokes. I have returned to the record repeatedly when writing about Jewish women and performance but have never felt able to do more than scratch its surface, and then mainly to position Williams historically in a lineage of bawdy musical comedy by American women from Sophie Tucker to Bette Midler.

And so, for my 50th birthday this year, I decided to perform the album myself. In exploring how the archive and the repertoire exceed the limitations of the other and “exist in a constant state of interaction” (Diana Taylor, 2003), this performance was not intended as a re-enactment, an homage, or an impersonation. Rather, it was an attempt to locate the material in my body by finding a Jewish voice, to interrogate the record as an act of cultural memory, and to interpret Williams’ performance from the inside out.