At the age of thirty-nine, the artist Paul Gauguin lived for around five months in an abandoned slave hut on the Caribbean island of Martinique. He later wrote:

I had a decisive experience on Martinique. It was only there that I felt like my real self, and one must look for me in the works I brought back from there rather than those in Brittany, if one wants to know who I am.

I was fortunate enough to visit St Lucia in September 2016, and squeezed in a 24 hour trip to Martinique, to experience for myself the place that changed Gauguin’s artistic practice. He had sailed there from the Isthmus of Panama with Charles Laval, a twenty-four year-old “disciple” from Brittany. Panama had been disastrous; torrential rain, mud, exhaustion and the immanent collapse of the Panama Canal project had contributed to their failure to secure permanent work or accommodation. Recalling the attractive Martinique capital of Saint Pierre where they had briefly anchored on their way out, Gauguin made up his mind to go there in order “to live like a savage.”

It turned out not to be quite the Edenic paradise he had hoped for. Both painters succumbed to dysentery and fever, in addition to which, Gauguin claims, his young companion attempted suicide. Despite these catastrophes, Gauguin managed not only to produce a dozen paintings, but to make significant steps towards abandoning the naturalism of the Impressionists. The following year in Brittany Gauguin painted his breakthrough anti-naturalist work, Vision of the Sermon, which is now at the National Gallery of Scotland in Edinburgh.

Although when I visited, the newly refurbished Paul Gauguin Interpretation Centre was not yet open, it is located close to the spot near Le Carbet where the artists’ hut stood, just inland from the beach at l’Anse Turin. Gauguin painted Au Bord de Mer from practically the spot where a delightful locally-run restaurant now stands, where my companion and I toasted Gauguin’s memory with superb French wine, while a party boat disgorged its passengers into the warm Caribbean waters.  Unfortunately the weather was overcast, and my photo of the beach does nothing to convey the temperature, which was a humid 28 – 30 degrees. This was hurricane season, and indeed within a couple of weeks of my visit, hurricane Matthew would devastate the Caribbean island of Haiti. Gauguin and Laval were on the island during the same season, and experienced torrential rain.  I thought as a Brit that I knew what heavy rain was like, but even the relatively mild downpours I experienced were extraordinary, and I imagined what misery it must have been for the feverish Gauguin and Laval, having to cope with deluges pouring off the steep slopes above.

I planned to visit the elevated Morne d’Orange, where Gauguin painted Martinique Landscape, also at the National Gallery of Scotland. By an unbelievable stroke of luck, my Airbnb host turned out to be a Doctor in Cultural Geography at the University of the French West-Indies, with a passionate interest in Gauguin. Like me, Dr. Corinne Plantin thinks Gauguin must have met the Greek-born journalist and writer Patrick Lafcadio Hearn, who was on the island at the same time as Gauguin in 1877, and had connections with the owners of the estate at Morne d’Orange. Even if Hearn and Gauguin did not actually meet, scholarly opinion holds that Gauguin must at least have come across Hearn’s discomforting stories of zombies, quimboiseurs, and spiritual practices connected with witchcraft. Hearn later published Two Years in the French West Indies, and Youma: The Story of a West Indian Slave. He “loved” Martinique, he wrote to a friend, “as if it were a human being.”

I did make it up into the Morne d’Orange, where the spectacular vista Gauguin painted in Tropical Landscape can be glimpsed between tropical bush and Flamboyant trees. Every few meters along the steep road, carved wooden crucifixes marked the Roman Catholic stations-of-the-cross, reminders of French missionary influence on the island. I even managed a rapid pastel sketch of the bay, not far, I think, from the spot where Gauguin must have stood. The bay is dominated, both physically and psychologically, by the volcanic Mount Pelée, known to the inhabitants of St Pierre as Fire Mountain. Hearn predicted several times that Pelée would erupt, and in 1902 it did, killing all but two of the town’s 30,000 inhabitants. The story of how the French governors prevented people from leaving is heartbreaking. One of the two survivors, Auguste Ciparis, a prisoner in the town’s dungeon-like goal, subsequently toured with the Barnum and Bailey travelling circus, billed as “the evil survivor of the city of death.” Following the eruption, the island’s economic as well as administrative centre transferred to Fort de France, and St. Pierre – thought by many to be cursed – has to this day remained relatively undeveloped. Much of the town’s original layout has survived, including the main street, rue Victor Hugo, where Gauguin used to pick up his mail.

There is evidence Gauguin explored the inaccessible north coast of the island by boat, ending his journey halfway down the east coast at la Caravelle.  We arrived at the same destination by car, along roads that ascend into the clouds some 12km above sea level, before zig-zagging down to the Atlantic seaboard via a series of precipitous hairpin bends. Gauguin wrote admiringly of women porters who carried supplies on their heads from one side of the island to the other, a not inconsiderable journey, before braving deadly fer-de-lance vipers with only a hipflask of rum to sustain them.

When in August 1887 Gauguin received word that a Parisian buyer was interested in his ceramics, he wrote begging friends to fund his passage home. “I must get out of here,” he pleaded, “otherwise I shall die like a dog.” Having secured his own fare, Gauguin departed in October, leaving Laval to fend for himself. The journey to Marseilles took twelve to fourteen days by steamship, and Gauguin arrived in Paris in early November. Laval limped back to Brittany the following summer, bearing “curious” paintings Gauguin deemed to be “art.” Sadly they are unknown.

Having visited Gauguin and Laval’s haunts on Martinique, I feel I have gained a more nuanced grasp of this formative period of Gauguin’s life. I better appreciate the appeal of Gauguin’s dream of a Studio of the South, not only in terms of lifestyle and colour, but sheer distance, both geographical and metaphorical, from European “civilization.” But it is Lafcadio Hearn’s influence that intrigues me. In light of the “mysterious” and “primitive” character of Gauguin’s anti-naturalistic turn the following year, the impact of Hearn’s writings on Gauguin’s artistic practice has, I feel, yet to be fully explored. 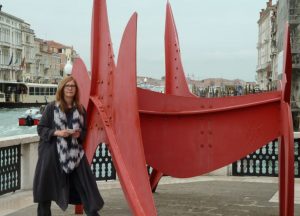 Fiona Saint has written all her life; aged six she was the world’s youngest published author, and in her twenties she wrote advertising copy in London. While raising a family she wrote speculative film scripts, and practiced as an artist. Fascinated by what she believed was an untold story about Van Gogh and Gauguin, in her fifties she began studying Art History at Plymouth. Having obtained a First Class Honors and won the Hartley Dissertation Prize, she is pursuing her interest in these artists at postgraduate level, and hopes eventually to publish her research.