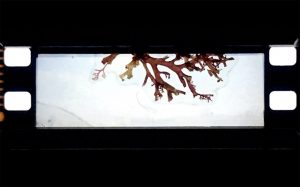 I was awarded an artists residency at Plymouth Arts Centre, PAC Home, Batter Street studio between March and June 2017. The opportunity provided an invaluable space to develop my artistic practice and on-going research concerned with the realm above and below the pelagic/marine horizon. The studio space acted as a testing ground for me to gather, assimilate and gradually edit a range of virtual and material data. During the residency, from March until June, I witnessed the seasons gradually changing, experiencing the daylight hours extending and mapping my journeys both above and below the sea.

In the course of the residency the two exhibitions programmed at Plymouth Arts Centre were by the artists Malcolm Le Grice – Present Moments and Passing Time, considered to be a pioneer of avant-garde and experimental film from 20th January  – 18th March (a dual site exhibition co-hosted by Peninsula Arts Gallery, Plymouth University) and Mike Perry: Land/Sea, 7th April 2017 – 17th June 2017 whose concerns focus on the natural environment and marine plastics/pollution using found objects and photography as a means of documenting his findings. The timing and the content of these exhibitions were particularly fortuitous. Ben Borthwick, Artistic Director of Plymouth Arts Centre writes how my work ‘coincided with a number of concerns from Mike Perry’s exhibition – photography, the marine environment, ideas of remoteness, human activity within the landscape, the interplay between design and natural forms.’ 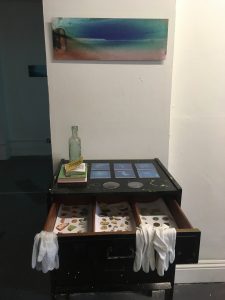 My focus was to create a site responsive, practice led research body of work on the Barbican/waterfront of Plymouth. I achieved my aims and generated a series of experimental, process led, still and moving images, sound recordings and meteorological data revealing both the seen and the unseen aspects of above and below the physical and metaphorical horizon of Britain’s Ocean City.

My work, considers the notion of the macro and the microscopic in relation to my phenomenological experience of nature, working with the changes in implied scale that can occur when visual and conceptual horizons are explored. This is further developed in the gathered data and creating examples of embodied manifestations taken from my microscopic observations.

I incorporated a combination of scientific imaging data collecting mechanisms, including infrared, underwater cameras and microscopes in addition to low-tech analogue lens and lens less imaging devices. Focusing on the liminal spaces between the visible and invisible horizon, the sea and the sky, I produced a sequence of films combining analogue processes and digital technologies using the vast and intimate aspects of the space, a series of experimental pinhole photographs plus a volume of hand made film slides that were developed and projected in the studio space.

The three-month residency included studio visits from Lucy Rollins, Assistant Curator and Ben Borthwick, and concluded with an Open Studio event, which provided the opportunity to share my project with a wider audience and test a range of presentation modes and displays.

Datum Line, a 35mm analogue film, captured on a return boat journey on Plymouth Sound has been selected for the festival, Making It Real at Ugly Duck, Tanner Street, London by The London Alternative Photography Collective, between 6th until 8th October 2017

Additionally, a selection of pinhole photographs developed during the residency are on display at PKH, Francis Clark in Sutton Harbour, Plymouth as a part of the ArtWorks initiative.

Rachael Allain is an artist, researcher and lecturer based in the South West of England. Her multidisciplinary practice incorporates both experimental still and moving image, sound and installation. Rachael’s experiments explore phenomenology in relation to site, the temporal, alchemical properties of analogue film as well as the immediacy of the virtual, scientific and digital data technology.