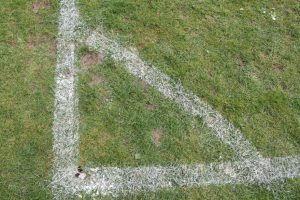 Laura Hopes, a University of Plymouth PhD student within the School of Art, Design and Architecture, will be exhibiting work at the Portland Stadium Bowl from 8th September to 16th September 2018 (11.00am – 6.00pm) as part of this year’s b-side festival.

Laura has reanimated the dramatic Portland Stadium Bowl, situated in a former quarry next to the Young Offenders’ Institution. Installed sounds give visitors the sensation of being on a football pitch cheered on by the roar of 5000 ghostly supporters, where now there only stand terraces of trees.

“That Portland has such a grandiose amphitheatre, now rarely used, seems a metaphor for the quietened industries of the island, and the quarrymen whose hands now lie idle, mirrored by the forced inactivity of the young men residing at the Institute in Grove.

Using stories of the residents of the Young Offenders Institute past and present, I want to explore what dreams and realities are represented both by the space and the beautiful game. Surely every young footballing child dreams of scoring in front of a home crowd, with the attendant visceral and deafening aural wall of sound surrounding them?”

Look out for some special b-side football matches too which will be announced on @bsidefest Twitter.